a thorough musical education through the piano 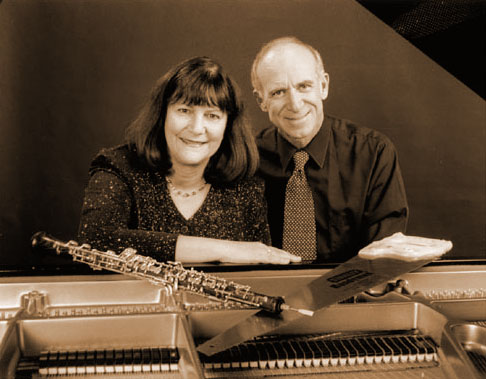 Alpha Hockett Walker graduated with honors and a Performers Certificate in Oboe from the Eastman School of Music, where she majored in both oboe and piano. She appeared as oboe soloist with the Rochester Philharmonic, was first oboe of the Eastman Wind Ensemble, Eastman Philharmonia, and the Saginaw Michigan Summer Festival. As a chamber musician, she has collaborated with members of the Cleveland Orchestra, Boston Symphony, San Francisco Symphony, Los Angeles Philharmonic, Vermeer String Quartet, California Chamber Virtuosi, and the Sequoia String Quartet. She was the accompanist for the five-week Jean-Pierre Rampal master classes held in Nice, France, as well as for the Martha Graham Dance Studio in New York, and for many of the visiting artists during her years in Ithaca and Rochester. In addition, she was the composer for the 1977 off-Broadway musical "The Great American Singing Commercial," which played to capacity audiences and received rave reviews.
In 1991, Alpha was keyboardist with the Los Angeles Philharmonic on its three-week European tour under the direction of Kurt Sanderling. (The tour included five days of chamber music and chamber orchestra concerts on board the QE2 crossing from New York to Southampton, England.) Also in 1991, she and her husband, David Weiss, toured Alaska with the Arctic Chamber Orchestra, playing both oboe and piano. She performed as an oboist with the L.A. Philharmonic during each of the 1991 through 1997 Hollywood Bowl seasons, and under Esa-Pekka Salonen, she played on tours to Paris, New York, Washington D.C., and at home at the Dorothy Chandler Pavilion. She has been featured several times (as pianist) on Philharmonic Chamber Music Society Concerts. David and Alpha form the chamber duo known as DnA. Their many performances have included cruises on the Royal Caribbean "Song of America" and Vision of the Seas, appearances at the 1997, 1998, and 2005 International Double Reed Society Conferences, held at Northwestern University in Chicago, Arizona State University in Tempe, and the University of Texas at Austin, Texas, respectively, and a six-concert tour of Costa Rica in 1997 as part of the "Seventh International Music Festival. In 1998 they were featured at the Sarasota Music Festival. In 2000, 2001, and 2004 they gave concerts at the new recital hall at Ithaca College which is now officially named the Hockett Family Recital Hall in honor of Alpha's family. In October of 2001 they played a full recital at the University of Iowas OctOBOEfest. The duo has given two faculty recitals at USC and performed numerous programs for Philharmonic Support Committees and MTAC branches.
Alpha is Past-President of the West Los Angeles Branch of the Music Teachers Association of California, and is a member of the Music Teachers National Association, the California Association of Professional Music Teachers, the Teachers of Music Arts, the National Guild of Piano Teachers, and the Suzuki Association of the Americas. She is widely recognized for her superior organizational and computer skills. For many years she served as chairman of the WLA branch of the Southern California Junior Bach Festival and also presented numerous workshops, master classes, and recital programs by guest artists and teachers. These include Laurette Goldberg, Barbara Schneiderman, Doris Koppelman, Susan Sverck, Louis Lepley, Charles Asche, Gloria Cheng, Yin Yin Huang, and many others.
In great demand as a teacher, Alpha maintains a full schedule at her music studio in Los Angeles. Her students consistently receive top honors in festivals and competitions. She is well known for her innovative teaching methods effective for both children and adults, as well as her practical course for piano teachers.